The team got plenty of opportunities to share in worship with their Haitian brothers and sisters today at three different services - 7:00 am in Cayes at Bon Berger (Good Shepherd), where our own Pastor David was the guest preacher for the first time. No small audience there - the service is televised to a good portion of Haiti as well as picked up to livestream to Haitian expats all over the world. He might have preached to two million people people today - through an interpreter! No pressure :)

The second service was at 10:00 at the second congregation of Bon Berger in Cambry, where the guest house is located. Pastor Chad was the guest preacher there. The congregation was excited and pleased to hear that their Pastor Louis would be doing a “pulpit swap” in this fall with Chad, when he visits Chicago and preaches at Chad’s church. It was a wonderful way to tie the two churches together. 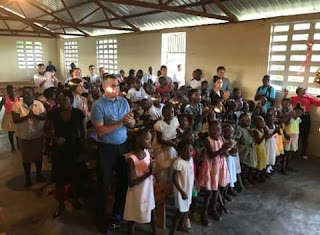 Along the way this week, friendships will be renewed between our team members who've gone on multiple trips and Haitians in various locations we visit regularly. It's a special time for both, and speaks volumes of the love and concern our ministry displays for the Haitian people - it's not a "once and done", but instead, our teams come back, and care about them.One of the pictures below is a reunion between a team member and a boy who first met 5 years ago. He waited for our team member to come down the hill this morning so he could be the first one to greet her. Both were happy to see each other!

The afternoon was spent sorting. And sorting some more! The duffels that were carried in yesterday came from three or four different states via our team members, and each location had a “priority” list of items to gather from donors and pack - underwear, shoes, clothes of different sizes, bedsheets, etc. The Chicago team also had several thousand dollars worth of medicines and water systems materials in their duffels. It will all be used during the week, but had to be repacked in a sensible way for the first few days of ministry. It will all be reorganized as they go, but the big job was done today. The repeat team members were able to lend their experience, which is always a big help in tackling this massive job, and the Texas crew did a lot of prep work before they came - 240 sets of clothes were bagged and tagged by gender and size before going in the duffels. That was an immense help!

The third praise time opportunity came this evening, when most of the team headed back to Cavaillon via coach bus. The worship in all three places was vibrant, joyful, hot, and LOUD. Haitians believe in expressing their faith with exuberance! 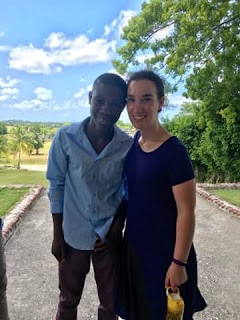 It was a welcome and unusual treat for the team to get to spend time with the kids (and today the community) of Cavaillon this early in the week, and it will help the rest of their time there tomorrow and Tuesday be even sweeter as the kids will be familiar with them and be ready to just enjoy the time more. It’s also great for the medical team, who usually miss out on the fun and games because they’re focused on their clinic tasks for the most part. Part of the team, though, is planning the “fun and games” and will just focus on loving on the kids. How great is that!

And the first “wrinkle” which people doing ministry in Haiti have got to be ready for - the bus they took to Cavaillion broke down on the way home and Pastor Louis, after some delay, was able to get alternative transportation back to the Guest House for them. The team is told repeatedly to expect things to happen on “Haiti time”, to be flexible above all else, and if asked to do something by the team leader, the answer is “ok, sure”. It’s the only way people can manage the realities of the situation there while working with a large team of people they’ve (in some cases) just met. It’s a wonderful, joyful, heart filling, heartbreaking, mentally, physically, and spiritually stretching week, and it’s unlikely this first wrinkle will be the last!

The water team will hive off Monday to go to LaHatte, the next place being set up with a water system. It’s really a “reboot”, as there was one there previously installed by another organization but it has been non-functional for quite a while. The need is pressing, as the leaders of the village could see quite clearly that when the water system was running, cholera was eradicated - and when it failed, it came back. There is no doubt that clean water saves lives in Haiti - in fact our engineer friends say it’s the best way to save lives. On Tuesday, the water team will go back to finish the job while the rest of the team goes back to Cavaillon.

The team will appreciate prayers for:
The team is grateful for your support and partnership! Enjoy some pictures from their day. 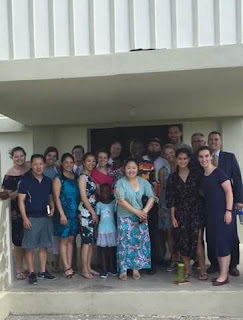 Posted by Chicago Metro Presbytery at 8:03 AM