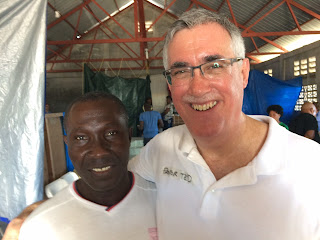 The water team is making great progress on the installation, and the training team has done a great job getting some Haitians trained in hygiene/proper water use - in fact, within minutes of training the first group, those folks went out and recruited others to teach what they'd just learned. The goal is to have a team of people trained in the technical aspects of the filtration system so that they can run it after the team is gone, and also have others that can make sure people understand how to use clean water - for key health areas like brushing teeth, washing babies, and drinking. Doing those three things will cut down the water borne illnesses dramatically, including cholera. 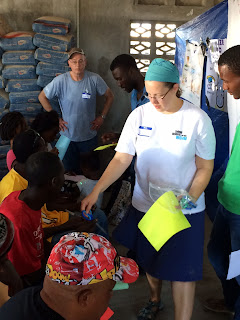 The medical team was able to see about 60 patients today, including a few that were time consuming procedures, like the little guy whose picture is attached. He has pneumonia and a very high fever. The team tried to get an IV in because he was severely dehydrated, but couldn't get into a vein. They started him on meds and gave him as much to drink as he could manage, and they'll see him again tomorrow. He's likely one that would not have survived without this medical care. 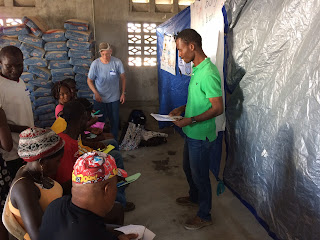 It was a good "learning curve" day as the team gets comfortable with the organization of supplies, the set up (4 provider stations, with intake and triage feeding into them) and the surroundings. Everyone worked hard and well, doing their tasks with diligence, good spirits, and servant's hearts. The crowds were steady but not overwhelming, and the church leaders were on hand for both the medical team's needs and the water system team's support. 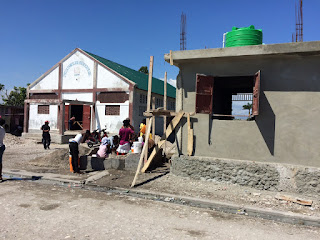 Since the hurricane, which made the church structure and a good percentage of other Savanne buildings and homes unusable (they are right on the water, where the hurricane made landfall) the people of Savanne have been hard pressed. There are no "social services" to make sure needs are met, so whenever ESMI or other Christian or humanitarian agencies show up, its an encouragement. To see the donations from ESMI supporters pour in to fix the church building, see a building go up for the water purification system, and now to have our team show up (as they've been doing twice a year for four years) proves to them that they haven't been forgotten. Although the needs are great, our team has been told "half the battle is showing up". What an encouragement to the people who live there! Even though the personnel on our teams can change with every trip, they are greeted like old friends because of the work the last team did for the residents' benefit. In return, the Savanne folks have pitched in tremendously with our teams to help however they can. There's a feeling of hope. Hard to put a value on "hope". Maybe priceless?

The small team who went to Cavaillon had a blast painting and tiling with the work team of Haitians who are there every day. They came back saying that when all the improvements and repairs are done, Cavaillon will be beautiful and almost unrecognizable from the early days of our support. We hope to have some pictures to share tomorrow, when a few will go back for more repair work.

Another small team will hive off for the day to visit a prospective location for future ministry, just doing some initial evaluation and touring. The teaching team will continue in Jeremie.

Lots of pictures from the day in Savanne are attached. Enjoy! And rejoice that God has given hope to this place, using our team to be Jesus' hands and feet and show His heart. 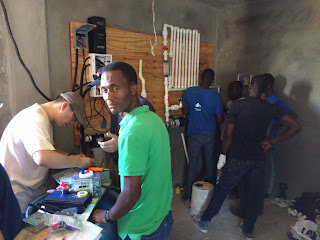 Thanks so much for sharing the work of the team by lifting them up in prayer. It is a critical contribution! 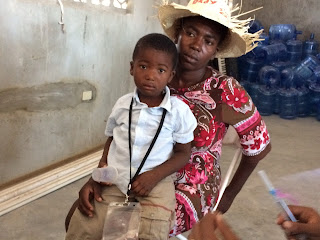 Posted by Chicago Metro Presbytery at 11:20 AM