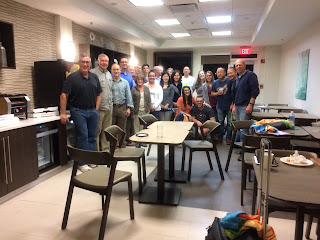 God has answered all of the prayer requests from yesterday just as we'd asked! Safe travel, materials arriving, and air conditioning!

The team is now happily at the Guest House at Cambry, which will be their home base for the week. They are near Les Cayes, in the southwest peninsula of Haiti. This region bore the brunt of the hurricane last fall, although the entire country sustained damage.

The air conditioning and electricity are on, and the team was fed a good dinner of chicken, rice, plantain, and carrots and green beans (the latter two items probably brought in from the states; ESMI staff shops at Costco in Miami!). After settling in and having a team meeting, people went off for showers and bed. It's been a long day!

They arrived at about 4:30 this afternoon after a 6 hour ride via coach bus from the Port au Prince airport. There was some concern at airport customs when their government issued documentation to bring in medications was questioned. They were also told a 5% tax on the value of the medicines was required. After arguing that they'd never been told that or charged that in the past, they were allowed to move on after a very thorough search which resulted in the confiscation of some meds. Fortunately, a generous supply of those same meds in other bags went through so the medical team has what they need to work this week. All of the water purification supplies came through as well, although those bags were keenly searched in Miami this morning due to all the wires related to the solar panels.

Tomorrow is a day of worship, fellowship, and organization. Several will go to early church at 7:00, but all will at least go to another service at 10:00. The team leader, Ted, will preach (with an interpreter) a both services. The service will be hot, long, loud, joyful and full of praise and music. In the afternoon comes the massive task of unpacking the medical supplies and clothes from all those duffel bags and organizing everything for the first two days of seeing patients.

The medical team and the water purification team will go to Savanne on Monday, a short car ride away, getting an early start with a 7:45 pick up at the Guest House. They'll be working at the same building, inside and outside. The water team will get started on their task of having a fully functioning system up and running by Friday. The medical team will set up a clinic for residents, where they'll see hundreds of people in just two days. A small group will go to Cavaillon for the day (about 45 minutes away) to pitch in with some ongoing physical repairs (painting, tile work, and brick work) which need to be completed before the orphans can move back; they've been "bunking in" at the Cambry orphanage since the hurricane in October. There is a small teaching team who are working in Jeremie all week training pastors, and they were on their way right after arriving at the Guest House this afternoon with an ESMI staff person to travel with them. This team of 26 has some ambitious goals for the week!

By the way, about the team - 20 of the 26 have ties to PCA churches in Chicagoland, although two no longer live there. The other 6 are from Florida and the Pacific Northwest. Most have been on previous trips - some on several and a few on just one other. The water team has 8 fully trained members. The teaching team is three people. There are 8 trained medical people. Seven others are able to fill non-medical roles with the medical team even though that is not their professional background. They will be invaluable in making things "work" all the way around this week.

For prayer: Thanks for your prayers. The team is grateful for them and knows how valuable your contribution is!

One picture - of the team last night at the hotel in Miami. A few are missing as they came in to Miami later. More pictures to follow this week if cell signals are strong enough for them to come through!
Posted by Chicago Metro Presbytery at 4:36 PM