Kids, kids, and more kids. But first a flat tire.

Roads in Haiti are not particularly friendly to travelers or their machines. Three miles out of Cambry this morning on the way to Cavaillon, the team bus got a flat tire and there wasn't much to do about it except wait at the side of the road for the flat to be replaced. It was a hot wait, but the full heat of the day had not kicked in yet.

Ninety minutes later, they were on their way again, but in a different vehicle instead of the bus; they later learned it took two people all day to scrounge up a replacement tire for the bus. Such is life in Haiti. But thanks to their efforts, the bus is ready to go tomorrow.

And now here's where the kids come in. Cavaillon is now home to over 150 orphans - all of them very excited to see visitors, especially when the visitors make time to play with them.

But first some of the needs were assessed and met. It was a learning curve kind of day for our team, most of whom have no previous experience in this kind of triage medicine where several needs are met in a "station to station" kind of set up, leading up to seeing the trained medical staff. First, "intake", where basic information is noted (height/weight/age/name) and a record started or continued from a previous medical team visit. The team's intake person today found herself with a "helper" for most of the day - a lap is a terrible thing to waste, so needs were met on multiple levels at that station.

Next stop is scabies wash, a stop for some clean clothes, and finally to the doctor station. Along the way, as much hugging and holding as possible. Finally, if medicines are needed, there's a pharmacy set up where vitamins, antibiotics, salves, de-worming meds are dispensed with written instructions and given to the housemoms.

Approximately 60 kids were seen today, but that leaves close to 100 for tomorrow as well as the housemoms. Hopefully an earlier arrival and a quick set up by our now experienced team will make that possible.

There were some sick(er) kids today, but most suffer from things our teams have seen and treated before. Malnutrition is an ongoing concern - the children are much smaller than they should be, having lost ground over the long term during their growing years. A sixteen year old there looks  to be about 9, a 12 year old looks to be the size of the team doctor's 5 year old, and 6 or 7 year old kids are weighed in at 25 pounds. Scabies and lice are part of living in group care in a tropical environment. Most are doing better in regards to intestinal parasites after intentional and repeated treatment for de-worming by our teams and others over the past few years. That definitely affects how well they can retain nutrition.

The team returned to the Guest House for dinner and was pleased to find the electricity on. Unfortunately, there's still some problem with the water supply. The staff continues to work on it. Showers were managed, but slowly and awkwardly - no water from the shower head, only the lower spigot...which probably makes it a "non shower" experience - but it surely refreshed our hot and tired team.

After dinner, showers (sort of) and a team meeting, tired folks gratefully found their beds.

This evening's report on little Daniel back in Cambry is not as encouraging as hoped for. This morning there seemed to be some improvement, but by the end of the day he had faded somewhat again. The team doc and team leader took extra time to explain exactly what needed to happen as far as nourishment for Daniel tomorrow to the house mom; medicines continue as well. One of the older children seemed to take some concern for him and the team leader used his growing creole vocabulary to explain to her, too!

Tomorrow, back to Cavaillon. Wednesday's plan calls for going to Savanne, the poorest "suburb" of Cayes. Thursday's visits are scheduled for Biggarouse and Darivager. Friday will likely be Port Salut. But as always in ministry in Haiti, flexibility is key. Things change!

Thank you for your prayers! 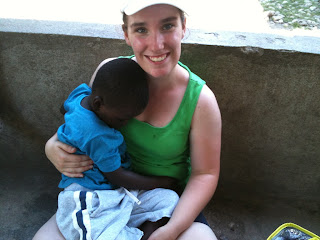 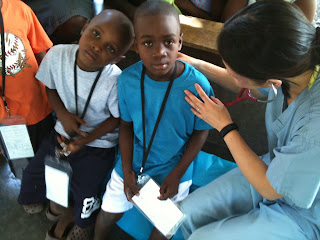 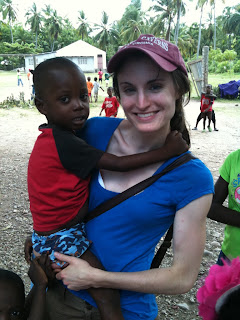 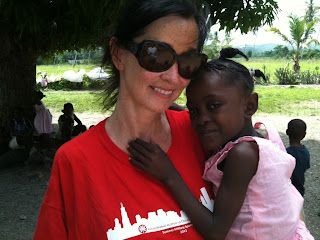 Posted by Chicago Metro Presbytery at 7:01 AM