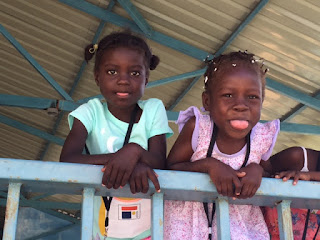 Today was a day with lots to celebrate, and blessings were seen on all fronts. Apologies in advance for the length of this update and the number of pictures attached...

First, the amazingly smooth work of the water purification team including clean water/hygiene training resulted in the system at Savanne being completely installed and tested today and ready for the community dedication tomorrow. Well done!! 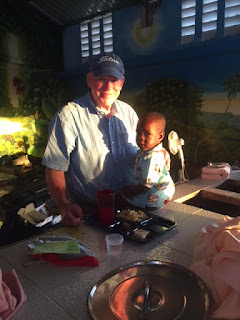 The hardworking and well trained team has even been able to use other hands-on skill sets to re-focus on a "bonus" task - getting shelves up at Cavaillon in the storage rooms and dorms. This wasn't planned, but the team has the know-how, time and resources to do it, so why not? Why not indeed! This team could probably do just about anything! By the way, the funding for the materials for these shelves is the overflow from a gofundme project sponsored by a few of the water team guys, who raised more than their goal to cover some additional water system costs, so they are using it on the materials for the shelves. What an awesome way to maximize their time and abilities in ministry there. 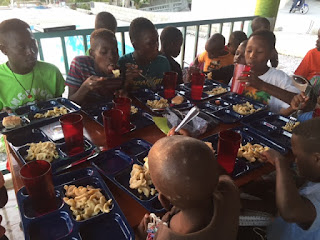 So, they multi-tasked today, also doing some prep work in Cavaillon, measuring and getting resources together. They also gave the water purification system there a check up. It was installed a year ago and has been run by Haitians who were trained by them at that time. Its sturdy construction withstood the hurricane last fall, which did extensive damage to the living facilities there. And today the team found it in tip top condition, a testimony to the work of the Haitians who oversee it. They are doing a great job! 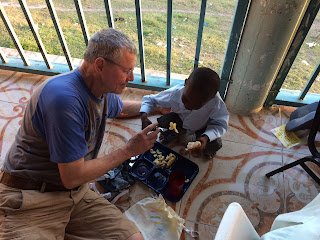 The teaching team returned to the guest house today from Jeremie after three full days of teaching 20 pastors how to more fully and accurately teach and preach Bible passages by giving them study skills and tools to help them preach the text. These pastors were hand picked for their leadership skills, and it is their job now to maximize this teaching by training other pastors. They represent 15 churches in 5 different denominations, and between them have approximately 3000 people in their churches. The goal is to exponentially grow the impact of this teaching time so that many more can benefit. It was a great three days! 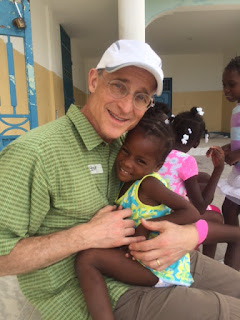 There was a change of plans for the medical team today. Instead of going to Mangnat (or in Creole, Mayan - lots of places have both French and Creole names, which works fine for Haitians but keeps English speakers routinely confused!) they stayed at the Guest House and saw the 85 Cavaillon kids and their housemoms. Last night was the close of Carnival, the Haitian version of Mardi Gras, and the roads around the region were still clogged with people going home from Cayes, the center of Carnival this year. It seemed best to let everyone else travel today! 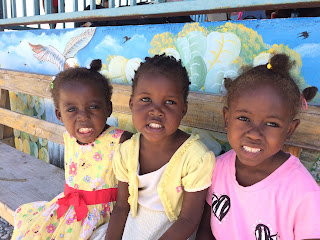 The medical team gave out hugs and medical care to the kids in equal measure. There was a lot of time for interacting, as some of the pictures will show you. A few naps were taken on laps, which no one minded at all! The kids were in good shape overall, with some attention needed for scabies, which always seems to be the case for kids in group care in tropical climates. The most difficult case today was removing a rubber band which had become deeply embedded in a young girl's ear. It had become infected and was quite the challenge. It was a reminder to the team that kids are kids everywhere. What else explains a little person pushing a rubber band into her ear? Fortunately, the little girl, her ear, and her hearing will be fine. 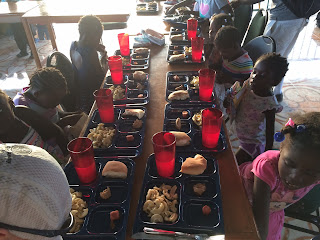 And the day ended with a very special presentation to the Cavaillon kids of their very own place settings to use once they get moved back into their own housing, which they got to try out today. It was a project long in the works and was originally planned to dovetail with the opening of the new kitchen/cafeteria facilities at Cavaillon this winter, but the hurricane damage put that behind schedule. Instead, there will be a dedication ceremony of the in-progress facilities on Friday (with all the kids being bused to Cavaillon, too, for just the day) but the team gave them the shiny blue trays, utensils, and bright red cups today. ESMI provided a special meal of macaroni, hot dogs, and peanut butter on bread. Team members circulated showing the kids how to use the forks, because they only had spoons before. The children were delighted with the special trays, cups, and utensils...and hot dogs! Housemoms, too, were given a special moment in the spotlight to be thanked for their tireless work on behalf of the children. Gift bags with a beautiful scarf, soaps, and other toiletries were provided for them. It was truly a wonderful celebration with delighted children, grateful housemoms, and team members who couldn't stop smiling. And hugging children :)

Tomorrow: Water system dedication at Savanne, and then the "shelf team" will go to Cavaillon for a day of construction. The medical team goes to Mayan/Mangnat for the day. 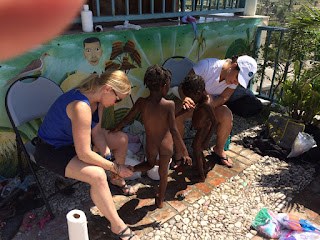 Friday: In the morning, the team and the Cavaillon kids go to Cavaillon for the new buildings dedication/celebration, and then the medical team will spend the rest of the day at another village, La Hot. The "shelf team" will likely stay at Cavaillon all day to finish up their work. And then Friday night, the last re-organization of supplies, which are left at the pharmacy at Cambry, the orphanage down the hill from the guest house. And a short night's sleep before an early morning bus ride back to Port au Prince. From there, home! 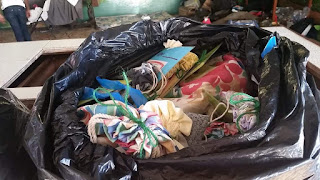 For prayer:
Thank you for praying! 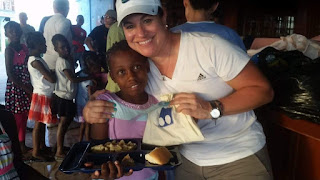