Have you heard the one about "making plans in Haiti"?...

Actually, the team deployed in three different directions today, and two of those went as planned, and went wonderfully.

The children’s ministry team spent a great day at Cavaillon doing lots of fun things, like Bible story skits on the story of Daniel and the paralytic lowered through the roof (performed in costume, no less!) singing, games, and for sure lots of hugs and smiles. These kids are so receptive to attention and the chance to have fun with adults, it makes for a joyful experience for all. Eighty five happy kids, 8 happy and probably pretty tired team members!

The water team had a hugely impactful day today. First, the final steps to getting Savanne back on line, complete with a new and VERY deep well, were completed successfully. The local water board is ready to go with the knowledge to keep it running, with help as needed from Living Waters. And as if that wasn’t enough for one day, they got ahead of schedule and checked out the Cambry system this afternoon and lo and behold, with a few repairs and a few new parts and batteries, it too is up and running. No one expected that, but what a great thing! Three water systems in one week! The Cambry folks still have to formalize their “covenant” and have a water board re-trained, but this is huge for the Cambry community. 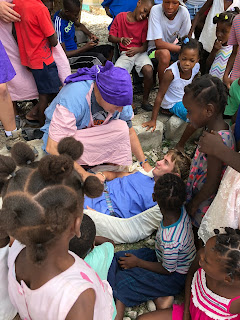 And the medical team? Not as they planned, but clearly as God had planned...they arrived at Savanne and were set up to start seeing patients by 10:00 but it was clear the crowd was even bigger today than yesterday. They agreed they’d see 65, and then pack up and go to Cavaillon...and then it was “okay, 80...”, and yet the sick folks (babies, especially) just kept coming. When all was said and done, they’d seen 160 patients by working non-stop for 8 hours in the oppressive heat and humidity, with perhaps a few energy bars eaten along the way. They were assisted by 2 community health workers and some church leaders/volunteers, and of course their stalwart translators. Needless to say, they missed the opportunity to enjoy the time at Cavaillon with the others, but God had a different plan for them today. Their resiliency was sorely tested as the need, the pace, the heat, and the tiredness wore on them - but they were champs! Exhausted champs, for sure, but true servants and professionals as they did what they felt needed to be done.

Two stories from today - Malone, the girl who gave her life to Christ amidst her intense medical treatment yesterday, came back today just to be with everyone. She was feeling much better - better than she had a in a long time, apparently. Whenever she caught a team member’s eye, there were big smiles. And more of her story came to light - both her father and uncle are voodoo witch doctors, and she’s fearful of their reaction to her new faith in Jesus. Both were away from home yesterday and today, but she’ll be having to talk with them soon. 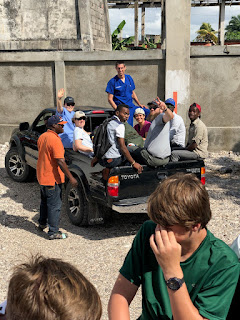 Near the end of the day, the team leader was approached by a man who was not there to see a doctor, but to thank the team. During the last team’s visit to Savanne in February, they treated his baby son and very likely saved his life with some timely antibiotics and breathing treatments. He just had to come back and thank them again for the gift of life they gave to his precious son. It was a great reminder to the team that although the work is hard and the needs cannot possibly all be met, some needs are met...and it can change or save a life, such as Malone’s or this baby’s. Today was one of those days. Clearly it was time well spent.

Tomorrow the plan is to go to Mayan, a remote village about an hour away. Our teams are the only ones to ever go to this village, and they’ve only been there once. Medical care is non-existent for these folks, so it’s a real need. Only catch is there are no roads for part of it (did we say remote?) so 4 wheel drive vehicles make dry river beds the “road” as needed. Another “Disneyworld” type ride, as long as the river beds aren’t full of water...and it was raining late tonight. If Pastor Louis deems it safe and they go, they’d leave early, stay for long enough to see a max of 50 people, and then head to Cavaillon to say goodbye to the kids there. If Pastor Louis says “no go”, they’ll spend the day at Cavaillon. Either way, they hope to swing by a beach in Port Salut for a quick look at the ocean, maybe getting their feet wet :) at the end of the day.

Their week of ministry is almost done, and they are very tired. And Saturday morning will come early - they leave the Guest House at 4:00 am to go to Port au Prince for the flight home.

Just a few pictures today...thank you for journeying with the team in this ministry!

Posted by Chicago Metro Presbytery at 7:59 AM