Today was a great day for the team!

Yesterday’s sense of being overwhelmed and tired after a day of travel, heat, new sights and new places was replaced today with the joy of worshipping with Haitians in three separate services in two locations. The evening service tonight was mostly with the children of Cambry as many adults were at Mardi Gras (4 miles away in Cayes, but the lights and music can be seen and heard from the compound).  Here’s a picture of two of the kids in worship with one of our team members.

The afternoon was spent organizing the supplies – a mammoth task and critical to the smooth workings of the days coming up. Having two veteran Haiti travelers who are pediatricians on the team this time really aided the work; the team leader thinks it’s the best organization job he’s seen yet! The second attachment is a picture of some of the task, but without a panoramic lens a picture can’t do it justice... twenty four hundred pounds of medicines and clothes to unpack!

Another highlight of the day was being serenaded by some of the kids from the Cambry orphanage. About 20 of them walked up the hill to the compound/guest house and sang for our team. Just the beginning of these precious little people completely stealing the hearts of our team members!
The team is eager to start! Early tomorrow morning, most will go to Savannes, the poorest of the poor suburbs of Cayes until mid-afternoon, where the focus will be medical and children’s ministry. At that point they will rejoin the small team left at Cambry and work for the rest of the day in similar fashion. As of now, that is the plan for Tuesday as well.

The first “wildlife” adventure of the trip involved a teenage team member finding a spider in the bathroom at the guesthouse – and very understandably leaving with haste and a startled scream. Her teammate dad was summoned, who in best “dad” mode gathered some tissues to dispatch the offending creature. A sharp “Whoa!” was heard from the bathroom, with said team member retreating for a more appropriate mode of disposal. The spider was as large as a full grown tarantula! No damage done in the encounter…except to the spider. 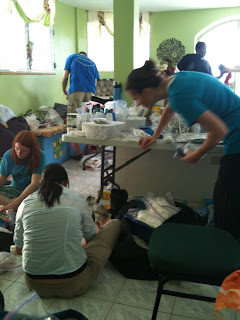 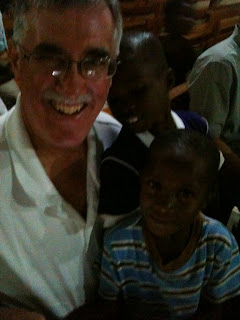 Posted by Chicago Metro Presbytery at 8:55 AM