It doesn’t count as a trip to Haiti unless there are rain and transportation issues. Today was a “two for one”!
The early start to Cherette was delayed until it was determined that the rain falling in Cambry was not worse up in the mountains. It is very easy to get stuck in Cherette if you are on the wrong side of the rainfall – for days. So, with a later but safer start, the entire team boarded a bus for the first leg of the trip.
The plan was to change into four wheel drive vehicles at the end of the road. Literally, the end of the road; it’s creekbeds from there on up. But the bus had other ideas (busses in Haiti live a hard life and there’s hardly a bus repair shop on every corner; breakdowns are common), so more time was lost waiting for the four wheel drive vehicles to meet them a little nearer to Cambry than originally planned. Once again on their way, spirits were high. The off road “road” to Cherette has been described as better than a Disney ride through a rain forest. And two of our team actually got to drive some of the vehicles up. Awesome!
And as they pulled into Cherette, the best was yet to come. Two hundred children were gathered in worship and were singing with such joy at the top of their voices they could hear them from a distance. As the team came in the building and filled in around the edges to watch, they saw a display of joyful singing and dancing that “made the whole trip worth it right there”.  The children sang for them and after introductions were made, the team trouped up to the front and sang for the children (a rather credible version of “Jesus Loves Me” in Creole – they had been practicing!). It was met with clapping and much approval!
The picture attached is the first group of children waiting to see the medical team. The team was very encouraged at the progress the children have made in comparison to their first visit two years ago. These orphans have been sponsored by a consortium of individuals in several churches for a full year now, and it shows. The funds go for adequate food and care by more and better trained housemoms. It also helps to raise the quality of education by affording better trained teachers.  There were the ever present scabies issues, but not to the extent seen in the past. The kids are growing and are happy. They weren’t at all shy with the team, which is another big change. The first team that visited Cherette was quite a shock for these remote village dwellers, who kept trying to see if the “white” went all the way up past the edge of a shirt sleeve!
There was a big issue with lice, however. Doctors and the team leader worked hard to convince the staff that the best solution was to shave the heads of the girls and start from scratch with treatment and then boiling all clothing and bedding at once. It was a hard sell but the only way to get ahead of such a bad infestation.
Even the compound is making great strides. There is a water purification system in place to go with the newly dug well which runs on solar power. There are propane tanks for cooking instead of wood fires. And the walkways are paved so the issue of walking everywhere in mud has been alleviated.
Some of our team members, who are trained engineers, spent the entire day at the river bed assessing the situation with ESMI staff member David Short. Partial remediation has been made to counteract the flooding that occurs as a result of the river actually shifting course a few years ago during a severe hurricane season. However, it is not complete and decisions need to be made about future work…or moving the village.
The second picture is Pastor Nerva, the pastor in Cherette, who is father figure to the children and tireless in his work with them. He has a very interesting story to tell of God’s grace in his life. If you’d like to hear more, let us know.
Tomorrow, the survey team and a small contingent of the medical folks will go back to Cherette, while the majority of the team will go into Savannes. With Mardi Gras officially over, it seems to have calmed down in the last day.  Savannes is one of the poorest sections of Cayes, perhaps some of the poorest in all of Haiti. Unemployment is 100%. There are no schools. It is a dark place where voodoo is followed by most. But ESMI has sponsored a church plant, and our teams have visited there before.  A year ago, our team was able to witness a moving of the Spirit there which was the direct result of much prayer before and during their visit by many people. The new church grew so fast it outgrew its brand new building in the month after our team's visit. The team is anxious to go back and reconnect with some of the people last year's team met there!
Although fatigued, the team is working seamlessly. After a very long day in Cherette, all of the remaining supplies were completely reorganized for the last two days of ministry. Fortunately, the heat seems to have abated somewhat, which is a relief.
Please pray that the team will benefit from a night of rest, and will stay in good health and good cheer for the rest of their time in Haiti. Tomorrow in Savannes is yet another “new situation” for many and will be stressful. The needs there are great, as are the crowds. Pray also for another safe travel day for those going to Cherette.
The team is grateful for your prayers! 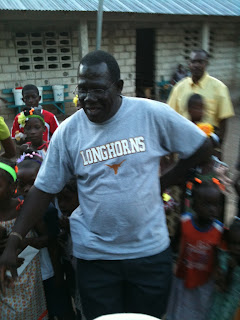 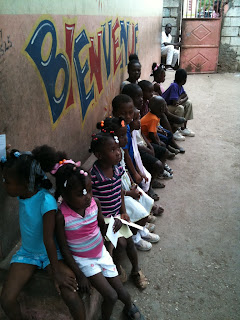 Posted by Chicago Metro Presbytery at 9:02 AM