The team’s devotional time tonight went a little longer than usual. You would think after a day like today it would be shorter, as they are tired. But a great kind of tired.
By 1:00, the medical team had seen 115 kids in Savannes. They worked on until 5:30, doing at least three major procedures as well as the more typical range of care needed among the children and adults. There were 5 different medical stations set up now that the team was all working in one place again. There was barely a stop for lunch; usually the team just snacks while they go. Every person was prayed for as they came through for care. Some were taken off to the side for longer conversations about Jesus. At least a few accepted Christ as a result.
The children’s ministry was going full tilt all day, ushering in 15 kids at a time for an hour of crafts, coloring, and singing. They were riveted to Hector’s story telling about Jesus. Pastor Louis was astonished at their reaction, as they settled down to do these group oriented things requiring quiet and giving attention. In fact, they waited quietly outside for their turns in the hot sun for hours.
The engineers also put in another day’s work, this time plotting out a plan for a school in Savannes. It would be the first school to operate there. As soon as funding is in place, the building will go up – yet another way the Christian voice in Savannes will be heard, proclaiming God’s love for these broken and hurting people and working to change the very heart of the community from darkness to light.
Other seeds were sown today, too. A team member met a man who had just on Monday lost his wife and was now a single parent to two young children. He has no work and begs everyday for food to give to them. Antoine has been to America, and is highly educated by Haitian standards. Yet in Savannes, there is no work for him unless the “godfathers” allow him a job…and that won’t happen until he swears allegiance to them and to their voodoo gods. Thus far he has refused. He says he used to pray and used to believe in God, but “where is God now?” Would you please pray with the team for Antoine, that God would meet him at this crushing point of need and make himself known to Antoine, giving him hope and a future as he deals with sorrow, loss, and the responsibility of raising his children alone?
By the end of the day, more than a few people had pulled aside a team member to say they knew the team really cared about them because they came to Savannes - messy, poor, forgotten Savannes. They saw how they cared for each person who came to them, and how they treated each other. This spoke volumes to them about the love of Jesus – that they came, and they showed love “nan nom Jesi”.
As our tired but full of praise team members finished up their week in Haiti, their last team meeting had a hard time breaking up. They just didn’t want to be “done” – not with ministry, nor with each other.
Tomorrow is a long day of travel (they’ll be on the bus for the long ride from Cayes to Port au Prince at 4:00 a.m. EST) and a “re-entry” day. It seems that people who go to Haiti for a week feel like they’ve been there much longer due to the intensity of the experience. Please pray for safe travel and on time arrivals, for continued good health as they arrive home, and for a smooth re-entry and re-orientation to “real life”.
They’ll all have more stories and pictures to share in person. You will enjoy every one of them! And be sure to ask them if they want to go back. 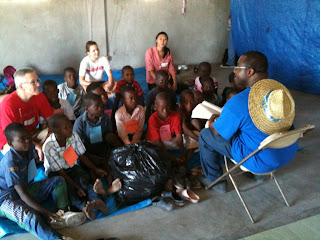 Posted by Chicago Metro Presbytery at 10:48 AM