“Savannes has been transformed. It’s different.”
This comment is from one of the team members who was there a year ago. Today was like a crazy celebration all day long. There was still a huge crowd, but the personality was different. Instead of desperation at the edges and the scent of discontent and wariness everywhere, like a pot of something bad ready to boil over, there was a happily bubbling feeling of reunion with touching moments and beautiful stories.
Jude was there waiting for the team to arrive and stayed all day, helping, hugging, and smiling. Here’s his picture with the team leader who forged a relationship with him last year. At that time, Jude was one of the wary, angry, powerful leaders of the community steeped in voodoo. By the end of their multi-day visit to Savannes, he was saying he wanted what they had. He wanted Jesus. And in the intervening year, he has grown much and become a leader in the fledgling church in Savannes.
Vilia Seide was also there. Last year, she was the mother of a very sick newborn as well as six other children. She had also just become a widow, her husband dying of cholera. With no husband, no money, and seven children her future was bleak indeed. Women in her situation often have only one thing left to sell, and that is themselves.  Pastor MonChera knew she had an idea of how to open a legitimate business to support her family, but had no funds. One of the doctors on the team last year went home and mobilized a group of women to underwrite a business plan for Vilia which included support until her new business could get up and running. Today she was beaming like a light bulb, and when she was taken to see this same doctor, once again on the team, the tears flowed all around.
Two changed lives because of the power of the gospel. The ripple effect has been enormous. The church began to grow quickly after much prayer and the concerted prayer and mercy ministry of the team there last year. In December, Pastor MonChera (the second attached picture is of him and his wife) held evangelistic services where another 100 people responded to the gospel. Things are indeed different in Savannes!
The team prayed for every patient that came through today (100 kids alone and many more adults); at least five were led to the Lord by the team’s interpreter.  The day was really chaotic at first, but settled into somewhat of a bumpy routine. Once the kids figured out you got a new set of clothes after a scabies wash, the little curtained facility that was set up was overrun with volunteers. Eventually, a ticket system was put in place to restrain the crowds, and things went fairly smoothly from then on. Such is the way of ministry in Haiti…try, adjust, try again, flex, and get it done, praying for people all the while!
Meanwhile, a small contingent went to Cherette again to finish up the medical attention needed and the survey work. It took three different replacement vehicles and a few hours waiting for them on the side of the road, but they eventually got there. It was hot work out at the river, really hot, for hours and the Haitians with the survey team recognized that white people can’t deal with the sun as well…so they used their bodies to shield the team members from the sun. Whenever the team members sat down to work something out, subtle shifts would take place so they were shielded. The team was touched by this silent service and the way the Haitians showed their gratitude for their labors in this most sweet and unassuming way.
The medical team had one serious thing to work on, and it took the whole team plus Pastor Nerva and a few others.  One very resilient and determined 6 year old orphan had injured her big toe, and one of our team members taking a closer look at the missing nail and injured nail bed brought her to the medical team saying, “there’s stuff alive inside her toe”. Indeed there was. But to thoroughly remove the “stuff alive” she needed a nerve block shot…which is where she showed her determination. Suffice it to say, the shot was given and the procedure completed but not until all were exhausted! You never know what you’ll be asked to do on a medical team in Haiti.
The team is thankful for many things –

Their last full day is already upon them. Tomorrow, all will go to Savannes. They could stay for weeks and still be busy there, so tomorrow will be bittersweet and difficult when it’s time to go. Please pray for them – that they have a sense of completeness and an ability to let go. Pray for the children’s ministry, which will run alongside the medical team, sharing bible stories and the gospel through story and acting. And praise God with the team that they have a ringside seat to see the gospel in action in Savannes, Cherette, Casa Major, and Cambry.

Thank you for reading to the end of this update. You’ve probably noticed as the week goes on they get longer! 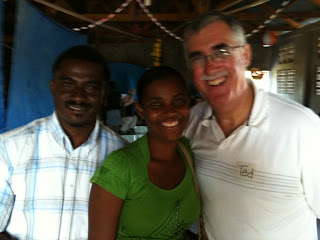 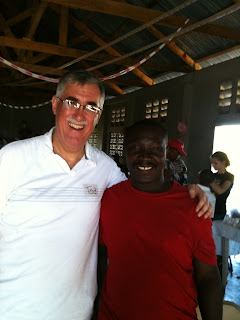 Posted by Chicago Metro Presbytery at 8:30 AM