It's at this point in the week that the updates often start to get really long. Read on for stories from a great day...or skip to the bottom for prayer requests :)

First, water is pumping from the new system in Cavaillon! The solar panels are operational and charging, and everything looks great. There is still work to be done - lots of it - but there were very happy faces among the team today. Our amazing engineers and all around smart guys even taught the visiting reps from the American water purification organization how to do something today they'd never figured out on their own - and they said it would be in the manuals from now on. Kudos to our guys! By the way, this system will be able to pump out an amazing 300 gallons of water an HOUR once it's fully up and running, and be verifiably as clean as Aquafina bottled water we buy here in the states.Is that great, or what?

Some of the work they have to do sounds like fun to the water team - they get to fix some grading issues around the housing unit and retaining wall with a bobcat on Thursday that rather conveniently just happened to be parked at the guesthouse this week. They'll take it to Cavaillon, do the work and then bring it back. Sometimes work is as fun as play, right?

And tomorrow, they'll spend the first half of the day in Savanne with the medical team...but there for the purpose of scoping out the location for the next water purification system. It will help them a lot to see the site and make some preliminary plans. They are quickly rising to "expert status" when it comes to this stuff!

Another important facet of the water system is using it and maintaining it correctly. The Haitians who are doing technical training are taking this very seriously, and our hygiene team led by Andrea is doing a great job teaching hygiene and proper use to them, as well hygiene to the housemoms and kids. Clean water pumping out won't help them if they put it in unclean containers or don't understand the difference between "clean" and "dirty" water.

And the medical team...what a day. LaHatte is about 90 minutes away from the guest house, pretty much straight back into the jungle. It's an orphanage that's been in the ESMI system for a while, but because it's hard to get to medical teams rarely go. Our team was the last one there two years ago. Fortunately, the kids were in great shape overall, with housemoms who seemed to run things very well. However, there were two kids with suspected heart murmurs who will need sophisticated follow up in Cayes, one poor 10 year old with such significant tooth decay that she was actually malnourished due to the pain it causes her to eat, and one little 8 year old who is suspected to have TB. He and his younger sister just came to the orphanage after their mother died of the disease two months ago. Both children were quarantined immediately and need to get to a hospital for chest x rays and confirmed diagnoses. They also saw a neighbor woman who had a severely infected cut on her foot; without treatment the team is afraid the infection will go to the bone and she'll lose her foot or worse. They did an initial cleaning treatment today and they'll see her again Friday in Cavaillon. She will likely need treatment beyond that, as well.

The story of this visit to LaHatte can't be finished without a "rest of the story" follow up from their last visit. It was two years ago in LaHatte that an amazing spiritual battle fell into the laps of our team when a woman who local people feared was possessed came into the compound completely "not in her right mind", in fact slithering on the ground like a snake. Voodoo was a strong influence in the region and possessions are not unheard of as part of that dark and evil practice. The situation quickly became both surreal and scary, and clearly something spiritual was going on. Feeling completely out of their depth, but faithful, the team began to pray out loud for her and at her, that the demon would be vanquished. A circle formed and hands were laid on her, and in the power of the name of Jesus, her behavior changed, clearly the demonic presence gone. Fast forward to today...Madgala is a leader of ministry in the church in LaHatte. In fact, that event seems to have been a catalyst for spiritual change all over the remote area, as if the grip of evil had been loosened. Please see her picture, attached, once again being prayed for today under very different circumstances.

For the next couple of days:

Pictures:
For prayer and praise:
Thanks for reading and for praying! 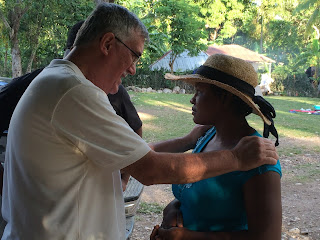 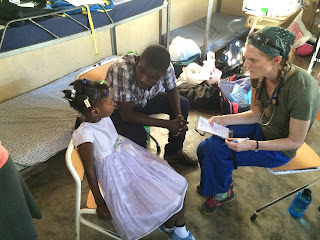 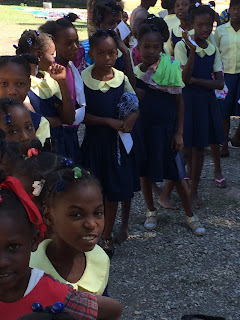 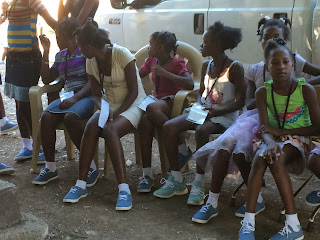 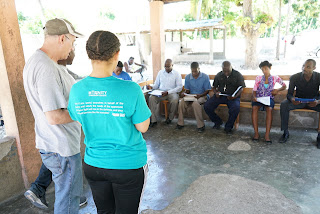 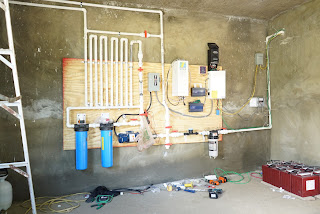 Posted by Chicago Metro Presbytery at 5:41 AM